He seemed even more distant, staring out through the smoke and semidarkness 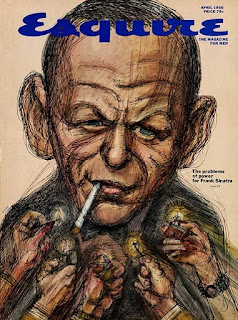 Frank Sinatra Has a Cold by Gay Talese
Esquire, April 1966

"Frank Sinatra, holding a glass of bourbon in one hand and a cigarette in the other, stood in a dark corner of the bar between two attractive but fading blondes who sat waiting for him to say something. But he said nothing; he had been silent during much of the evening, except now in this private club in Beverly Hills he seemed even more distant, staring out through the smoke and semidarkness into a large room beyond the bar where dozens of young couples sat huddled around small tables or twisted in the center of the floor to the clamorous clang of folk rock music blaring from the stereo. The two blondes knew, as did Sinatra's four male friends who stood nearby, that it was a bad idea to force conversation upon him when he was in this mood of sullen silence, a mood that had hardly been uncommon during this first week of November, a month before his fiftieth birthday."