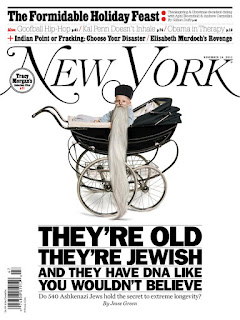 If someone had pitched the cover story about the Ashkenazi Jews to me, I'm not sure I would have run with it. But it worked and lended itself to a great cover (and great opening spread photograph).

I really liked Robert Sullivan's "A Slight Chance of Meltdown." It alerted me to the conflicts surrounding Indian Point, a nuclear power plant so close to home. I thought Sullivan did a great job of presenting both sides of the conflicts and demonstrating that, we kind of lose either way. (At least until we find alternative sources of energy).

"It often takes a disaster, or the threat of one, anyway, to get people thinking about their power--otherwise they just plug in or charge it overnight, without giving a second thought to where those electrons are born."

"The magnitude-5.8 quake in Virginia hit in the vicinity of the North Anna nuclear plant with twice the amount of ground movement the structure was designed for, cracking a wall of a reactor's containment unit and shifting the concrete pads under casks that store used nuclear fuel. It was the first time an operating U.S. nuclear plant experienced a tremor that exceeded its design parameters."

"If there was a fire in the reactor, then Indian Point would, by regulation, begin to shut down. Fortunately, if the sprinkler system was damaged in the quake, then workers could turn to the additional fire requirement and backup generators installed after 9/11. Unfortunately, the scenario that involves enough shaking to damage the reactor building also involves damage to the buildings containing the emergency fire equipment. Indian Point would then call in local fire officials, who, Entergy boasts, are well prepared to deal with radiation releases. But suppose this quake has damaged area transportation routes. Suppose trees and wires are down and the plant is running on backup power. Suppose emergency officials are dealing with other buildings that have collapsed on emergency equipment: A 2001 study argued that a magnitude-7 quake in nearby Bergen County would destroy 14,000 buildings and damage 180,000. In this scenario, the fire spreads and the reactor is no longer under control."

"As far as releases of radiation go, the NRC mandates only a ten-mile evacuation area for Indian Point. In other words, official policy states that New York City would be spared any sizable risk from a meltdown. But perhaps it's more sensible to look at what the NRC had to say in Japan. After the Fukushima meltdown, the NRC told Americans living there to clear out of a 50-mile zone. Subsequently, the Japanese government declared huge swathes of land uninhabitable for decades. The local 50-mile equivalent is a circle defined by Kingston to the north; Bridgeport, Connecticut, to the east; the Delaware Water Gap to the west; and the southern tip of Staten Island to the south. It includes all of the 8.2 million people living in New York City."

"If you agree with the governor that this small risk of contamination of 2.7 percent of the U.S. population is not worth the benefit of nuclear power, then you have to come up with some other way to replace the 2,000 megawatts of energy Indian Point currently provides to New York City and Westchester." The image of a dark Times Square mentioned later in this graf was pretty powerful. Never even thought about how much energy is required to keep Times Square lit, more today than ever before, I think.

"Entergy poses a good question: If you are against the possible destruction of New York City by Indian Point, and also against the as-yet-unquantifiable possibility of watershed damage caused by fracking, and at the same time against summer blackouts and all their attendant public-health and safety issues, is there anything left to be for?"

Also thought Gabriel Sherman did some great reporting for his story about Elisabeth Murdoch; James Murdoch (her brother) resigned from the boards of News Group's newspapers yesterday. Think this family has a long way to go before any good is associated with their name.

I also haven't really mentioned the Strategist section, but it's always solid. Loved Art of the Feast, the holiday food guide. Almost decided to make one of the featured dishes for today, but yeaaaahh, not happening.

Happy Thanksgiving!
Posted by Noelia de la Cruz at 10:21 AM