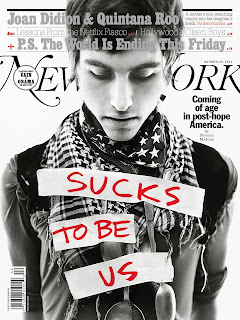 "The Kids Are Actually Sort of Alright," in the October 24 issue of New York Magazine aimed to analyze the current post-recession "post-hope" generation. I really wanted to love it. I had the biggest issue with her sources. Noreen Malone placed too much of herself, her experiences, her sister, her friends and acquaintances, in an article that was supposed to describe a group comprised of an entire generation, people from all walks of life. She seemed to know most of the sources beforehand (with the exception of Yaphet Murphy, an Occupy Wall Street protester later eliminated from the article for lying about his age, and thus, not fitting into the demographic). They all looked the same: white, Brooklyn residents (We all know which parts right? One, she described, had a "Brooklyn beard." What does that even mean?), members of middle class (or higher) families, who followed their dreams (woodworking or English, for example) and are now either stuck and hating it or stuck and loving it. No interviews with minorities, community college students, few with residents of the outer boroughs. No interviews with people of the generation who have perhaps beaten odds (low-income families) but found success through perseverance and hard work (they're out there).

I think she wrestles a lot with her point. I think she feels the way the title implies, that we're sort of alright, but is told otherwise by her research, sources, society. She ends by explaining a term she's often heard of: managed decline. "That's what we're doing when we decide that we can be okay with having more unpredictable careers and more modest lifestyles, if that's what's in store: Even as we hold out hope that something will reverse the trajectory, we are managing our decline, we are making do."

I agree. But between the awful transitions, beers with her Brooklyn sources/friends, analyses of songs from indie artists I'm sure most of our generation has not heard of, and one awful lamp metaphor, she did not support her conclusion.

It seems like most of the commenters for this story agreed.

More from this issue:

1. After the Rapture by Dan P. Lee -- Kind of amazing to me that Harold Camping was able to convince thousands that the world would end, first on May 21, and then on October 21. Dan P. Lee describes when Camping had a stroke: "As Camping was eating, God entered his body--for it would have to have been this way, there was no other possibility--coalescing several cells into a tiny clot of lipids that traveled through his bloodstream by the beating of his heart to a narrow bend in a tiny vessel in his brain. As Shirley stood by him in the dining room, the ambulance en route, inside his skull, God began suffocating Camping's brain cells." So good.

2. "I Was No Longer Afraid to Die. I was Now Afraid Not to Die." by Boris Kachka -- First, kind of weird that the title is a quote from the article. Second, I confess. I had no idea who Joan Didion is... still really don't, as I didn't read the whole article. But I loved the lede: "Reading Joan Didion on any subject is like tiptoeing across a just-frozen pond filled with beautiful sharks. You look down and pray the ice will hold. Meeting her is not a vastly different experience. Opening the door to her cavernous Upper East Side apartment, the writer murmurs a monotone "hello" but doesn't shake hands. There's bottled water, she says, waving in the direction of a double-size Sub-Zero in her double-size kitchen. She wears a sun-faded white sleeveless skirt-suit fashioned from the raw silk curtains in her old house in Brentwood. She is 76 but looks older. She has always been birdlike, five two and wire-thin, but never quite this frail. Her arms are translucent river systems of veins. Her face is worn, unyielding. "She doesn't express it," says her agent and friend Lynn Nesbit, but you can see the pain in her face.""

3. How to Survive a Zombie Attack by Dan Kois -- I was both amused by and extremely impressed with this five-page spread. Might be my favorite part of the issue. I would have probably argued that five pages is too many to devote to zombies, but it really works. It called on the expertise of a wide range of people, including Stephen King, professors, neuroscientists, producers and museum curators, to give useful advice for hypothetical (impossible?) situations. It was extremely well-done, educational, and fun to read.
Posted by Noelia de la Cruz at 1:56 PM