Our class war will rage on without winners indefinitely. 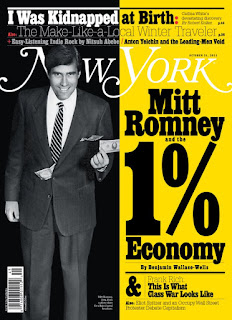 The Class War Has Begun by Frank Rich is excellent and my favorite of this issue. I feel about Occupy Wall Street and the protesters about the same way that Sam Graham-Felsen in Noreen Malone's "The Kids Are Actually Sort of Alright" feels: "Even just the physical style, the types of chants, the stuff that they're eating, the granola--it's just so derivative of the sixties," he said. "It's like, 'Guys, let's do something that's more our generation.'" I'm just annoyed with them, frankly. I get it. But I think they're going about it the wrong way. But anyway. It was really refreshing to read this article by Frank Rich that evaluated the movement by using historical context and a different perspective.
Excerpt "Elections are supposed to resolve conflicts in a great democracy, but our next one will not. The elites will face off against the elites to a standoff, and the issues animating the class war in both parties won't even be on the table. The structural crises in our economy, our government, and our culture defy any of the glib solutions proposed by current Democrats or Republicans; the quixotic third-party movements being hatched by well-heeled do-gooders are vanity productions. The two powerful forces that extricated America from the Great Depression--the courageous leadership and reformist zeal of Roosevelt, the mobilization for World War II--are not on offer this time. Our class war will rage on without winners indefinitely, with all sides stewing in their own juices, until--when? No one knows. The reckoning with capitalism's failures over the past three decades, both in America and the globe beyond, may well be on hold until the top one percent becomes persuaded that its own economic fate is tied to the other 99 percent's. Which is to say things may have to get worse before they get better."
The annotations are also excellent! And as an intern, I helped! I retrieved the first, congressional testimony, "Don't Forget Me for a Job," from the Center for Legislative Archives. Was told that editor in chief Adam Moss was so moved by the testimony he cried. I transcribed part of the second, "The Coffee Summit," as well as met Eliot Spitzer and got him the coffee when he came to the office to do the interview (ha, bizarre, but true).
"The Romney Economy" by Benjamin Wallace-Wells is also a good read, as is Logan Hill's profile of Anton Yelchin (I helped transcribe most of this interview and I hated Anton Yelchin by the end of it, haha. Thought Logan did a good job of illustrating Anton's essence in so few words without imposing any of his own opinions and letting the readers interpret for themselves. To Anton's credit, I've heard Like Crazy was amazing).
Posted by Noelia de la Cruz at 3:06 PM