In those days, nothing happened without men. 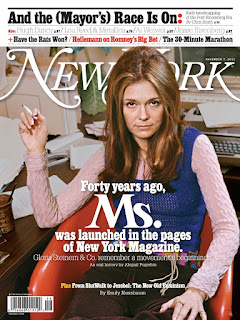 Loved this issue's cover story, an oral history to celebrate the 40th anniversary of the launch of Ms. magazine. I love oral histories! Sometimes it's just better to let the sources tell the story. Aside from learning about how this magazine changed so many women, liberating them, giving them a voice, I really enjoyed learning about the challenges of starting the magazine. Doing so in the face of that adversity made it all the more interesting. But just the tidbits about brainstorming the name of the magazine, the covers, story ideas. I loved that. Coming up with the money. The conflicts about representing diversity--how they wanted to more often but had to consider their Southern readers. The letters to the editor and commentary after the first preview issue (especially the negative ones). I don't identify myself as a feminist. (Not even sure what it means today). I'm not sure of what kind of woman I would have been in the 1970s. I'm not sure I would have been the bra-less, sign-bearing, vocal protester (though who knows). But I think I would have loved the provocative, thought-provoking, intelligent nature of the magazine. It went there. Also, what really hit home was the mention of the limited opportunities women had to become journalists. Not until I read it did I realize there was a time when being a journalist would not have been an option for me.
EXCERPTS
Pogrebin: In those days, nothing happened without men. You needed one man to be nice to you and then maybe you could run with it.
Milton Glaser (New York design director, 1968–77): We worked right out of the office and started simultaneously doing our weekly magazine. We really felt, all of us, that we were on the brink of a moment in time.
Steinem: It had a universality because it’s harking back to a mythic image—the many-armed Indian God image. And it solved our problem of being racially “multibiguous” because she’s blue: not any one race. (on the cover)
Pogrebin: We chose Ms. because it could be explained and justified—since “Mister” or “Mr.” doesn’t communicate a man’s marital status, why should women carry “Miss” or “Mrs.,” as if to advertise their availability as mates?
Louise Bernikow (contributor, 1970s): The story was my politics-is-personal moment. I grew up knowing “girls couldn’t,” and when it came to being writers, I knew that I couldn’t be a reporter for the New York Times or Newsday; I could only be a researcher. But I had never put it together in terms of the pyramid that the story reveals.
President Nixon to Henry Kissinger on White House Audiotapes, 1972
Nixon: [Dan Rather] asked a silly goddamn question about Ms.—you know what I mean?
Kissinger: Yeah.
Nixon: For shit’s sake, how many people really have read Gloria Steinem and give one shit about that?
New York Times Headline, March 22, 1972:
“In Small Town U.S.A., Women’s Liberation Is Either a Joke or a Bore.”
Gillespie: The magazine, despite its flaws, provided so many words that had been missing. So many silences finally broken. Ms. changed lives, changed attitudes, helped to create and change laws, policies, practices.
&&&
I was also thoroughly amused by the 2,000+ word feature about rats in New York City. Rats have become kind of an inside joke with a few of my friends. They always come up in conversation somehow and we freak. One of my friends has experienced unpleasant encounters. Did you know rats can collapse their skeletons to fit through a hole no bigger than a quarter?
Posted by Noelia de la Cruz at 1:19 AM