"Thing is, we're a community, and we got each other's back." 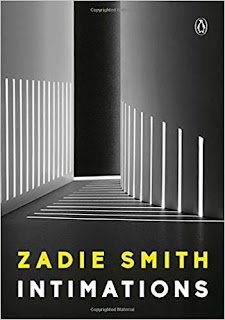 Zadie Smith read Marcus Aurelius' Meditations early in the pandemic for practical assistance (her words). A few months later: the publication of Intimations, a series of essays inspired by his musings. In addition to "The American Exception," which was published in The New Yorker last April, her book includes "A Woman with a Little Dog," which she read aloud during a fantastic conversation with Ashley C. Ford. It is so specific, humorous, and a moving reminder of what we've lost and would miss so much: the seemingly insignificant exchanges that made up our lives before everything went down. Ashley describes it as foreboding. I loved it.

"There she sat on that last day—I was passing with my little dog; a final chance for Maud to pee before we put her in the rental car—and I could see Barbara was preparing to bark one of her ambivalent declamations at me, about the weather or a piece of prose, or some new outrage committed by the leader of a country which, in Barbara's mind, only theoretically includes her own city. Already missing New York, I was keen to hear it. Instead she sucked hard on her cigarette and said, in a voice far quieter than I'd ever hear her use: "Thing is, we're a community, and we got each other's back. You'll be there for me, and I'll be there for you, and we'll all be there for each other, the whole building. Nothing to be afraid of—we'll get through this, all of us, together."
"Yes, we will," I whispered, hardly audible, even to myself, and walked on, maintaining a six-foot distance, whether to conform with the new regulations or to avoid Beck biting me in some vulnerable spot I couldn't tell."
(p. 51)

She starts reading "A Woman with a Little Dog" at 24:55—oh and just before then she describes her relationship with writing. ("I do need it. I'm not particularly proud of the ways I need it, but I need to organize my ideas, I need to set things down, I need to feel like life has meaning. And so that's why I do it. I do need those things.")

Their talk filled me up and it's well worth the watch.