They had already made each other's acquaintance in the delirium of their noon dreams. 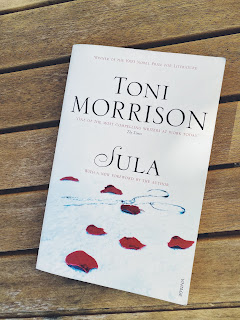 My first Toni Morrison. I can't wait to dive into more of her works. One wild ride, this Sula.

"Which was only fitting, for it was in dreams that the two girls had first met. Long before Edna Finch's Mellow House opened, even before they marched through the chocolate halls of Garfield Primary School out onto the playground and stood facing each other through the ropes of the one vacant swing ("Go on." "No. You go."), they had already made each other's acquaintance in the delirium of their noon dreams. They were solitary little girls whose loneliness was so profound it intoxicated them and sent them stumbling into Technicolored visions that always included a presence, a someone, who, quite like the dreamer, shared the delight of the dream. When Nel, an only child, sat on the steps of her back porch surrounded by the high silence of her mother's incredibly orderly house, feeling the neatness pointing at her back, she studied the poplars and fell easily into a picture of herself lying on a flowered bed, tangled in her own hair, waiting for some fiery prince. He approached but never quite arrived. But always, watching the dream along with her, were some smiling sympathetic eyes. Someone as interested as she herself in the flow of her imagined hair, the thickness of the mattress of flowers, the voile sleeves that closed below her elbows in gold-threaded cuffs.
Similarly, Sula, also an only child, but wedged into a household of throbbing disorder constantly awry with things, people, voices and the slamming of doors, spent hours in the attic behind a roll of linoleum galloping through her own mind on a gray-and-white horse tasting sugar and smelling roses in full view of a someone who shared both the taste and the speed.
So when they met, first in those chocolate halls and next through the ropes of the swing, they felt the ease and comfort of old friends. Because each had discovered years before that they were neither white nor male, and that all freedom and triumph was forbidden to them, they had set about creating something else to be. Their meeting was fortunate, for it let them use each other to grow on. Daughters of distant mothers and incomprehensible fathers (Sula's because he was dead; Nel's because he wasn't), they found in each other's eyes the intimacy they were looking for."
(p. 52)
Posted by Noelia de la Cruz at 4:51 PM