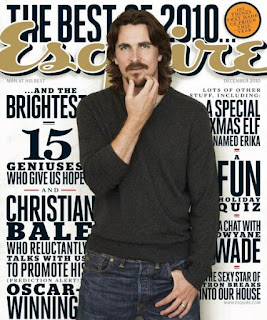 Esquire, December 2010
Excerpts from their list of the best of 2010:
"Twelve hours after the first call for help was sent out from Haiti, Chief Master Sergeant Antonio Travis touched down at Toussaint Louverture International Airport in Port-au-Prince, set up a makeshift control tower on a folding card table, and, for the next twelve days, guided the largest single-runway operation in history--four thousand take-offs and landings that brought four million pounds of food, water, and medical supplies to Haitians in need."

"And no copayments for preventive care (such as immunizations, mammograms, and screenings)."

"A recently discovered crate from Ernest Shackleton's 1907 expedition to the South Pole was opened by archaeologists. Inside, they found eleven untouched bottles of whisky. Samples will be sent to Whyte & Mackay in Glasgow, where master blenders will try to reconstruct the original recipe for the rare Old Highland malt, which had been lost."
"When a 911 call to report a house fire in rural Alaska yielded no response, the caller told his German shepherd, Buddy, to find help. Buddy obeyed, ran away, and found a disoriented state trooper whose GPS had frozen up. Buddy led the trooper back to the fire."
"Se lo perdio Raifi...y ahora de contragolpe Donovan...se le va larga a Donovan...la quiere por derecha Altidore...al area viene...en cita por el arquero...DONOVAN!!! GOOOOOOOOOAL!!!!!!"
"Addressing one of the largest mysteries in cosmology--why the Big Bang did not produce equal amounts of matter and antimatter, resulting in nothing, instead of a universe--physicists at the Fermi accelerator laboratory discovered that certain subatomic particles add 1 percent more matter than antimatter, creating everything we know."
"Stranded Sean Murtagh and Natalie Mead in Dubai while en route to their wedding in England, which led them to perform the ceremony locally and broadcast it to their guests back in London via Skype."
"The 107 students of the class of 2010 at Urban Prep Charter Academy in Chicago--all black, all male, all accepted to four-year colleges despite only 4 percent of them reading at grade level as freshmen."
And the brightest. My note to self. Keep these people in mind for future reference:
- Theodore Zoli, engineer
"Picturing the life of one person, imagining his gain, his peril, crossing the bridge that you built? Small, private, empathetic. It's the way a poet works."
"I've always said that bridge building is technology, not art. Or if it is art, it's not like Western art--by the few, for the few. It's more like folk art--by the many, for the many." - Zoli
"Up on its columns now, just before the bolts are set in place, the span is nudged. Zoli watches without comment as the men work. With one small lift from the crane, just enough to push tension on the lifting straps, the whole event is umphed a few inches to the north, and the platform finds its seat. Just like that, it is an event no longer. Just like that, it assumes the seat of the invisible. This is Zoli's moment, when function takes over, and everyone else looks away."
- Danny Hillis, cochairman of Applied, Minds, Inc.
Just check out the spread for this one.
Found both men to be really interesting.
And the last graf of David Granger's editor's note:
"My wife Melanie, and my friend Cornelia Suskind got to know a doctor named Jim Morgan this past year. He runs Lamp for Haiti (lampforhaiti.org). He does what he can out of a clinic in Cite Soleil to ameliorate an impossible situation by dispensing medical care and fixing basic problems. He has a very small budget. I don't know if the larger effort to save Haiti will work, but I know that Lamp for Haiti helps in small and meaningful ways.
That's all any of us can hope to do."
Posted by Noelia de la Cruz at 6:15 PM