It's just a small emptiness, a tiny lacuna. 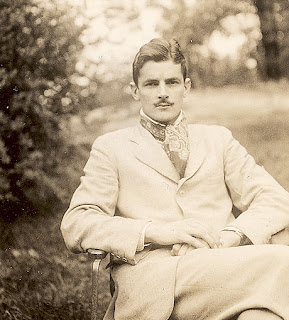 Dr. William Beecher Scoville, the writer's grandfather
The Brain That Changed Everything by Luke Dittrich, cont'd
Esquire, November 2010
"And what's true of individual brains is true of brain collections as well. With his Brain Observatory, Annese is setting out to create not the world's largest but the world's most useful collection of brains. Each specimen will, through a proprietary process developed by Annese, be preserved in both histological and digital form, at an unprecedented, neuronal level of resolution. Unlike Brodmann's hand-drawn sketches, Annese's maps will be three-dimensional and fully scalable, allowing future neuroscientists to zoom in from an over-head view of the hundred-billion-neuron forest all the way down to whatever intriguing thicket they like. And though each individual brain is by definition unique, as more and more brains come online, both the commonalities and differences between them should become increasingly apparent, allowing, Annese hopes, for the eventual synthesis of the holy grail of any neuroanatomist: a modern multidimensional atlas of the human mind, one that conclusively maps form to function. For the first time, we'll be able to meaningfully and easily compare large numbers of brains, perhaps finally understanding why one brain might be less empathetic or better at calculus or likelier to develop Alzheimer's than another. The Brain Observatory promises to revolutionize our understanding of how these three-pound hunks of tissue inside our skulls do what they do, which means, of course, that it promises to revolutionize our understanding of ourselves."
"I remember following my grandfather up a hill. He was usually a sharp dresser--a New York Times reporter once described him as "almost unreal in his dashing appearance"-- but on that particular morning I believe he wore a simple gray scarf, a floppy blue hat, and a threadbare ski suit. He was hauling a wooden toboggan behind him. It was either Christmas or Thanksgiving, one of the two holidays when the whole family would get together at his artifact-stuffed house in Farmington, Connecticut. I don't remember the slide down the hill, just the walk up.
I remember midway through one Christmas dinner, maybe his last one, when he pushed himself up from his chair at the head of the table, wandered back to his study, and came back a few minutes later with a crumpled bullet in his hand. He placed the slug down beside his plate, told us the story behind it. Stamford, Connecticut, turn of the century, a burglar breaks into the home of a young bachelor. The bachelor keeps a pistol by his bedside table but his pistol jams. The burglar's doesn't. A bullet enters the bachelor's chest, where it encounters a deflecting rib, skids away from a lucky heart. The bachelor survives and keeps the bullet as a memento. He eventually passes it down to his son.
The bullet just sat there, for the rest of the dinner, beside my grandfather's plate, and like some of the other artifacts in his home, it was both fascinating and terrible to contemplate. Had it found its target, had its aim been true, then my grandfather, his children, his children's children, most of the people sitting around the table, myself included, would have never existed. It was a matter of centimeters, a fluke of aim, bone, ballistics, and it had made all the difference, its repercussions rippling down through generations."
"Annese puts the slide on a rack to dry, and I look at at again, at the blank spot near the middle, the hole you can see right through. It's just a small emptiness, a tiny lacuna. A matter of centimeters. A beginning and an end."
Luke Dittrich. What a great writer! And what a fascinating article that flowed well and ended with the perfect conclusion. The complexity of the human body, and especially the brain, is one thing I sometimes wish I had the intelligence to study and really understand. Dittrich did a great job of recounting the history of his grandfather's experiment and explaining the parts of the human brain relevant to the story and how they function.
Posted by Noelia de la Cruz at 5:35 PM