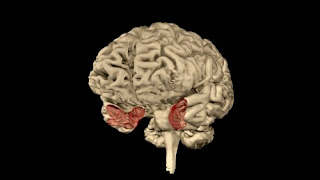 The Brain That Changed Everything by Luke Dittrich, cont'd.
Esquire, November 2010
"She asks him to trace the star. It's a hard task for anyone, with any sort of brain, though after awhile, with practice, people with normal brains tend to improve their results, mastering the necessary counterintuitive muscle movements. The first time Henry tries it, he does it a little better. And the next time better still. With each new attempt, he never remembers ever having attempted it before, but soon he's completing the task as well as anyone. Even Henry recognizes the strangeness of this.
"I thought this would be difficult," he says to Milner after tracing the star almost perfectly, "but I seem to have done this well."
In 1962, Milner arrives at another simple but revolutionary conclusion: Since Henry is incapable of consciously remembering the events he's living through but seems to be able to unconsciously remember how to perform certain physical tasks, the human mind must contain at least two separate and independent memory systems. The world of memory science is upended again."
"For example, Henry's inability to recall postoperative episodes, an amnesia that was once thought to be complete, has revealed itself over the years to have some puzzling exceptions. Certain things have managed, somehow, to make their way through, to stick and become memories. Henry knows a president was assassinated in Dallas, though Kennedy's motorcade didn't leave Love Field until more than a decade after Henry left my grandfather's operating room. Henry can hear the incomplete name of an icon--"Bob Dy..."--and complete it, even though in 1953 Robert Zimmerman was just a twelve-year-old chafing against the dead-end monotony of small-town Minnesota."
"He's an old man now, overweight, wheelchair-bound, largely incommunicative. Lately Henry's creeping decrepitude has itself suggested some new experiments. During another meeting, Corkin quizzed Henry on how old he thought he was. He guessed that perhaps he was in his thirties. Then she handed him a mirror.
"What do you think about how you look?" she asked while he stared at himself.
"I'm not a boy," he said eventually."