It was just the endless march, village to village, without purpose, nothing won or lost. 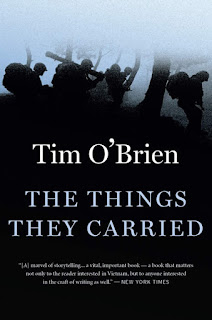 The Things They Carried by Tim O'Brien

"Often, they carried each other, the wounded or weak. They carried infections. They carried chess sets, basketballs, Vietnamese-English dictionaries, insignia of rank, Bronze Stars and Purple Hearts, plastic cards imprinted with the Code of Conduct. They carried diseases, among them malaria and dysentery. They carried lice and ringworm and leeches and paddy algae and various rots and molds. They carried the land itself--Vietnam, the place, the soil--a powdery orange-red dust that covered their boots and fatigues and faces. They carried the sky. The whole atmosphere, they carried it, the humidity, the monsoons, the stink of fungus and decay, all of it, they carried gravity. They moved like mules. By daylight they took sniper fire, at night they were mortared, but it was not battle, it was just the endless march, village to village, without purpose, nothing won or lost. They marched for the sake of the march. They plodded along slowly, dumbly, leaning forward against the heat, unthinking, all blood and bone, simple grunts, soldiering with their legs, toiling up the hills and down into the paddies and across the rivers and up again and down, just humping, one step and then the next and then another, but no volition, no will, because it was automatic, it was anatomy, and the war was entirely a matter of posture and carriage, the hump was everything, a kind of inertia, a kind of emptiness, a dullness of desire and intellect and conscience and hope and human sensibility." (p. 14)